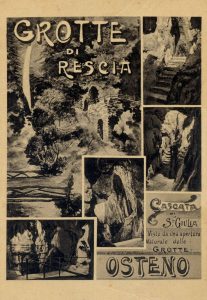 The Rescia Caves, a series of caves unified to a single complex at the beginning of the 20thcentury, wind along a tourist route of about 500 mt. Ancient documents demonstrate that the seven caves were destination for tourists from all over Europe since 1700.

At that time, the caves could be reached only by boat and visited with the help of a local “guide” equipped with a torch and a ladder, which accompanied the visitors.

At the end of the 19thcentury the caves were illuminated and unified by the engineer Mr. Chiverny.

Many vintage postcards made in 1933 prove that those natural attractions of the Porlezza region were already promoted.

As a result of travelogues, the locality of Rescia became well-known for the availability of travertine, misleadingly known as “tuff”. The tuff stone quarry of Rescia was active until the end of the 19thcentury.

Nowadays the Rescia Caves are private property and a family-owned business.